Hi, welcome to Patricium. You have reached the personal blog of Yue Yao (姚越). I hope you will enjoy the posts. Here is my CV and resume. Do please treat this page as an open dissussions/comment page. You can leave a message here for me. 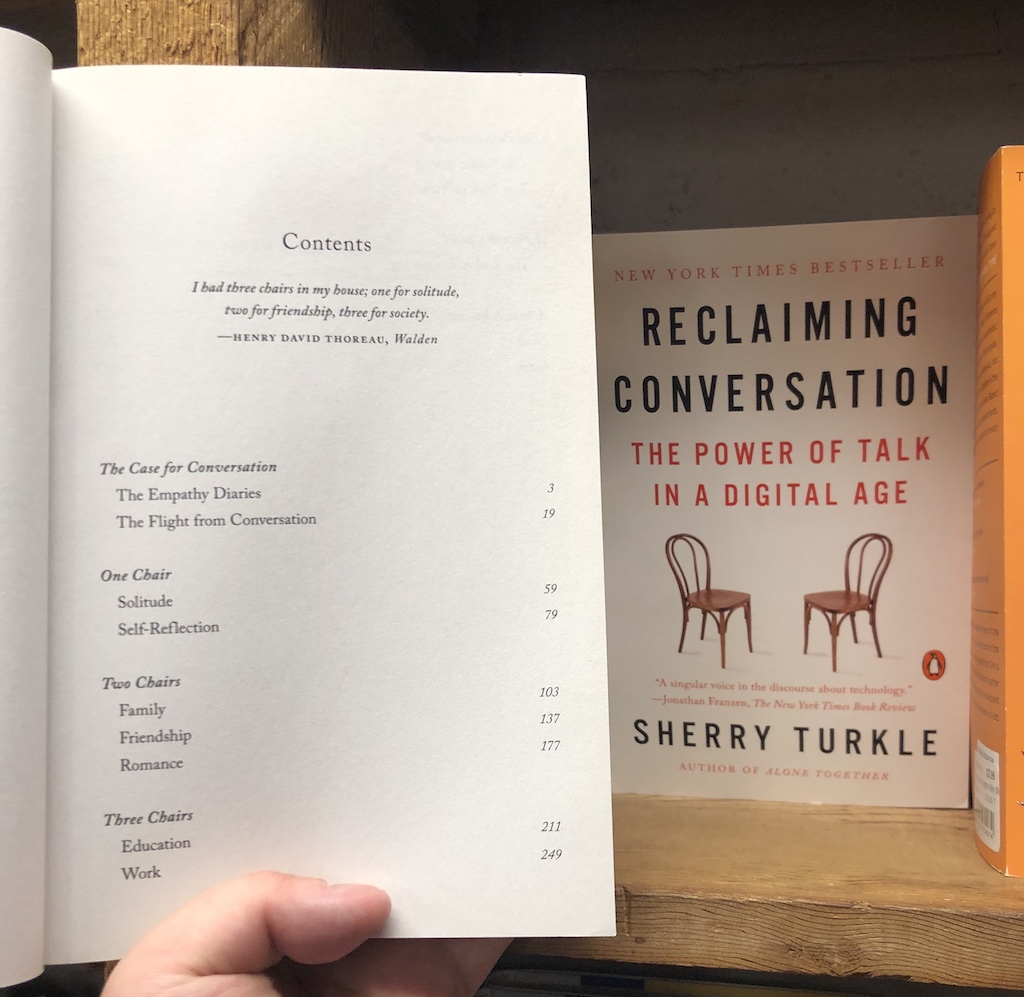 The "three chairs" quote from "Reclaiming Conversation". Found in a book store in Seattle.

I name this place Patricium. It’s made up from my English name Patrick and the Latin suffix “ium”, which basically means “a place”. The subtitle for this site reads “He has three chairs.”. In taking the course VR253, one of the assigned readers, Sherry Turkle, introduced me to a concept called “the virtuous circle”. The concept derives from the quote

I had three chairs in my house: one for solitude, two for friendship, three for society.

It emphasizes the importance of converstaions. One must have conversation first with himself, then with a friend, and bring that conversation to the society. This place, I hope, would become a place where I will be able to have a conversation. I always KNOW that words have power. It resonates with human minds and ignites passion, anger, curiosity, hatred, love, compassion… In this particular era, I feel a conversation encompasses special power.

For a very long time I have tried to write something. I am no good writer, to be honest. I lead a simple and somewhat tedious life so I don’t have much to blog about. But I will try to keep updating this blog around 1 post per month. I hope I can keep you all entertained. Posts will be written in English. Some posts are written in Chinese, which is my native tongue, mainly because they are about specific people/events around me.

The logo of the site, months after the creation of it, has been chosen. It’s part of the typing judgment stating the type of a particular term. The main reason to choose it because it’s cool and not many people has used it (the symbole lambda has abused for a long time). The original idea is to have only the entailment symbol, which looks tedious. Then I would want to have a capital Gammal, which feels verbose. I finally decided on the dot, which signifies empty context. Whenever you have a term that has a type under an empty context, you have a complete type-safe program.

Thanks for reading this.

P.S. I would like to put a poem that I love here. Hope you Enjoy it as well.

Do not go gentle into that good night.
Old age should burn and rave at close of day;
Rage, rage against the dying of the light.

Though wise men at their end know dark is right,
Because their words had forked no lightning they
Do not go gentle into that good night.

Good men, the last wave by, crying how bright
Their frail deeds might have danced in a green bay,
Rage, rage against the dying of the light.

Wild men who caught and sang the sun in flight
And learn, too late, they grieved it on its way
Do not go gentle into that good night.

Grave men, near death, who see with blinding sight
Blind eyes could blaze like meteors and be gay
Rage, rage against the dying of the light.

And you, my father, there on the sad height,
Curse, bless me now with your fierce tears, I pray.
Do not go gentle into that good night.
Rage, rage against the dying of the light.